Thomas Curran- From Holden To Newport, and Everywhere Between

Who is Thomas Curran?

Thomas Curran might be what some people call “crazy”, but that’s not stopping him from walking across the United States. Originally from Casa Mesa, California, Thomas started his journey on February 2nd, on the East coast of the country in Holden Beach, North Carolina. He’s been walking for almost a month, and landed in Aiken, South Carolina for a few days before he carried on his journey to the goal of Newport Beach, California. 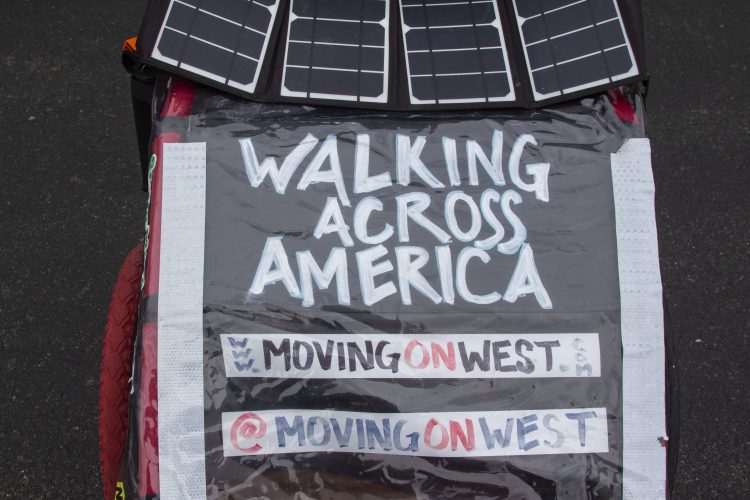 The front of Thomas’s cart which has worn out in the sun from just about a month of walking. It contains his blog website and Facebook handle.

When asking Thomas why he walked, his answer was simple. Pediatric cancer. His ex-wife Leslie, and now good friend, had suffered from pediatric cancer. Walking for this cause only seemed like the right thing to do. He has been involved with the Pediatric Cancer Research Foundation since the beginning, over 35 years. The foundation has raised over $42 million since it began in 1982, and was founded by physicians, parents, and people in the community. Thomas’s main goal of this journey is to raise as much money as he can for this foundation that he cares deeply about.

As far as timing, the opportunity presented itself quite perfectly. Thomas had been working as a chef for his entire life, opening and closing new restaurants, and was most recently a partial owner of a restaurant called “Taco Brat” in Casa Mesa, CA. He sold his share of the business to his partner, and decided to take a step back from the restaurateur scene and start a new journey in life. He also has rented out his home and car for the entirety of his trip, which helps him pay for expenses along the walk.

When Thomas began his route, it didn’t look like it does now. Initially he planned to walk a route in the northern part of the country, but after having to take a few days off due to a foot injury his route moved south. Due to the change in plans, he was able to walk through Aiken. He stayed for five days and is now heading to Augusta, GA. The main stopping points of his journey from here on out are Atlanta, Memphis and Oklahoma City. From Oklahoma City he hopes to walk Route 66. If time permits he wants to head upward to Colorado and Utah, otherwise he will continue to walk west. 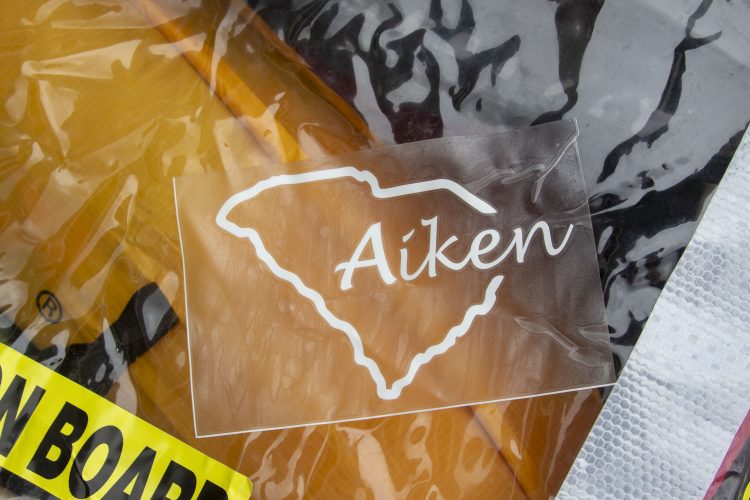 A sticker that Thomas purchased in Aiken, reminding him one of the places he has traveled through so far.

Thomas isn’t walking this journey alone however! He is accompanied by his two-year-old dog, Wink. At first he was planning on walking the trip solo. After his family and friends encouraged him to bring a dog, he adopted Wink last October from The Barking Lot Shelter located in San Diego, CA. Thomas loves Wink’s companionship and although having a dog along is hard work, he’s glad that Wink was able to come along on the walk. 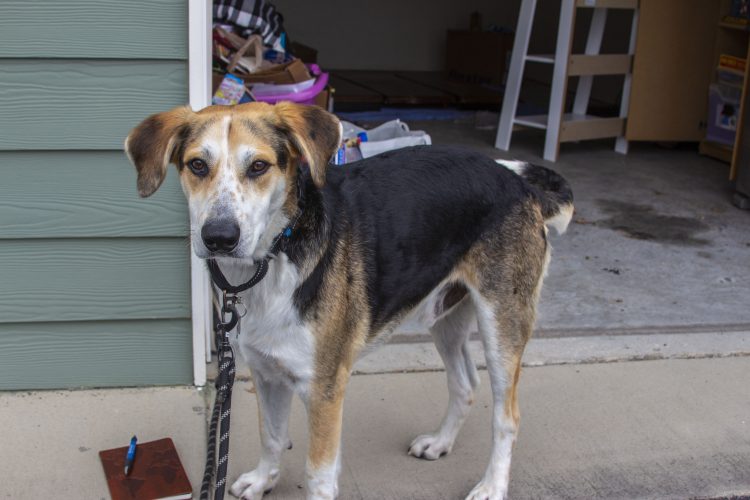 Wink, Thomas’s dog, who is along for the journey with Thomas. He was found wandering the streets in Tijuana and was brought to The Barking Lot shelter in San Diego.

Thomas and Wink started training about five months before the journey by walking three to four times a week. Thomas would carry a backpack with 50-60 pounds of weight and push the cart for anywhere from 10-20 miles. He also worked on strengthening his core, shoulders and lower back which are important for walking while pushing upwards of 140 pounds in the cart. 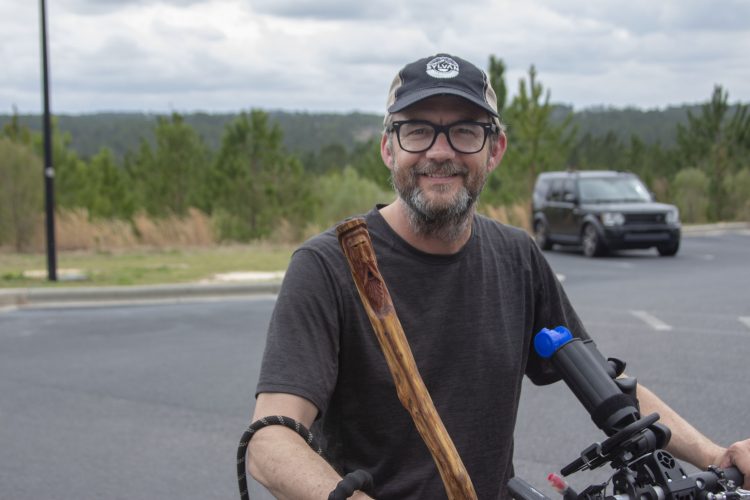 Thomas posing with the walking stick that he picked up on his stop in Aiken, SC.

Thomas encourages followers and friends to keep up with his journey by following his Facebook page and reading his blog. He is always open to meeting new people! On his blog you can track where he is located at any given time to stay up to date with his travels. Visitors to the blog can also easily donate to the Pediatric Cancer Research Foundation. Contact information is readily available to get ahold of Thomas if anyone would like to meet him on his trek, or offer up a warm place to stay for the night.

I wish Thomas the best of luck on his travels! It was a pleasure to talk with him and meet Wink. I admire the cause that he’s walking for, and encourage everyone that is able to donate to the Pediatric Cancer Research Foundation.

We’re a diverse bunch of collaborators who all chip in to help improve communications in Aiken -because that’s crucial to becoming an all inclusive compelling place to live, work, and play.  Interested in joining the team as an Intern or Contributor? We are always looking for passionate, shiny, happy people to Engage/Exchange/Excel in Aiken.  Email us at Hello@AikenBlend.Com.

Entrepreneur of the Week- Felicia Postles

Artisan of the Week- Michell Shumpert of Unique...