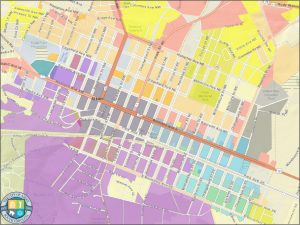 City of Aiken Zoning Map of the Downtown, Old Aiken and Historic Overlay Districts within their Zoning

The City of Aiken has several different planning districts called”Overlay Districts”.  The City also has Annexation requirements whose regulations vary and, at times, whose purposes conflict.  Navigating and grasping the intertwined and enmeshed rules of these areas can seem like you are tangled in a bowl of spaghetti with clarity slipping off your fork at exactly the wrong time.

The Old Aiken Overlay district, according to the City Zoning Ordinance, is “designed to promote a high level of aesthetics and the economic stability of the downtown area by protecting and enhancing the appearance of existing structures and the appearance of new structures.  The Downtown area is the heart of the City and deserves special protection that this district provides.”  However, the Downtown Business District that exists within this Overlay is to protect the commercial zone where zero lot lines and shared building footers are most common.  This commercial zoning area is also exempt from the parking requirements and landscape requirements that the other commercial zoning areas have in the City of Aiken.  The Design Guidelines for new construction in the Downtown Business District are some of the most relaxed and ambiguous within the City.

Conversely, the Historic District Overlay comes with extensive Design Guidelines and can require multiple Certificates of Appropriateness.  The Design Review Board (DRB) hears requests for entire building renovations right down to the approval or denial of yard art attached to posts at an entry gate visible from the street.  One of the most memorable headlines relating to the work of the DRB had to do with Flying Pig statues that just didn’t fly within the guidelines.  While in the past it was thought easier to ask for forgiveness than permission; with a new Planning Director and Staff at the City, asking for permission has become much easier and is the recommended course of action unless you just want to throw your spaghetti against the wall to see what does and does not stick.

The Planning Commission is a recommending body to City Council whose purview ranges from maintenance and revision of the City Map, the Master Plan and Subdivision Regulations to suggested capital improvements and zoning regulation revisions.  Also, Aiken’s Planning Commission has a unique authority in hearing one time public reading and approval authority over a Planned Urban Development project within the City limits.  With input into the Comprehensive Plan, the Zoning Ordinance, the Master Plan’s subdivision regulations and authority over Planned Urban Development projects; the Planning Commission is the place to watch as the City grapples with growing for the future while preserving Aiken’s character and the historic past.

So with the Old Aiken Overlay District, The Historic District Overlay and the Downtown Business District all co-existing, touching and overlapping in some places, initially confusion can set-in.  Adding to all that the Zoning Ordinance and the various Boards and Commissions that hear land owner or tenant request means the spaghetti bowl can be a tangled mess.  However, with Aiken Business Connect and the special ingredient of an “eager to serve” Planning Department, regulations imposed to protect the future of Aiken are just simple steps in a process that encourages new businesses and renovated houses. 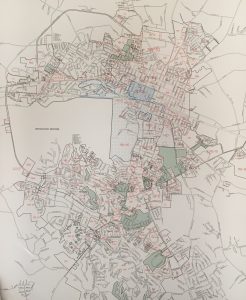 Art in Aiken to Buy or to Try